Narendra Damodardas Modi, the Gujarat born politician is the first prime minister who is born after India’s independence in 1947 and the second prime minister not from the Indian National Congress to have won two consecutive elections, as well as a majority in both terms in the Indian lower house of parliament. He was the chief minister of Gujarat from 2001 to 2004 and also an integral part of the Bharatiya Janata Party (BJP) and its National Democratic Alliance (NDA). He is also a member of Rashtriya Swayamsevak Sangh (RSS), a Hindu nationalist paramilitary volunteer organisation and became the 14th and the current Prime Minister of the Indian union in 2014.

He is one of the busiest persons of India or maybe the world. He runs the country and traveling the world for work, despite his old age he is way ahead of others when it comes to great decision making and also adapting new technologies. The various gadgets help him to accomplish various important tasks and here I am not talking about just smartphones but also other gadgets who have played and are also playing a crucial role in the life of our hard-working Prime Minister.

Our PM is tech-savvy and uses best-in-class Apple and Android-based smartphones to remain active for his work and also on social media platforms. He is of great fond of Apple smartphones.

The the seventh generation of the iPhone, succeeding the iPhone 5 was seen in the hands of Narendra Modi various times. Once he was seen making a strange but funny face looking at his phone, maybe taking a selfie or looking what’s behind him . And the other time he was taking selfie with Mongolian Premier Tsakhiagiin Elbegdorj with his low storage yet great product iPhone 5s. It does not cost much now but was very expensive when it was released in 2013.

The ninth generation of the iPhone, released on September 9, 2015 came with improved features and upgraded operating system and Modi ji also did an upgrade fast. He is fond of selfies and his selfie with China’s Li Keqiang was the epic selfie of 2015. Because of this, there was a instant increase in the demand of the phone and it reached to the top of the list of Most-Searched Gadgets in 2015. One of the most popular Prime Ministers of the world, Narendra Modi is usually seen taking selfies and pictures with his different models of iPhones. But When it comes to work with a smartphone, he is always seen with a Samsung phone in his hand. Samsung is said to provide an easier interface as compared to that of Apple so maybe he prefer Samsung for his work in his office. He was once seen using Samsung S5 Gold variant while doing some work. Narendra Modi also led to the opening of the world’s largest mobile phone manufacturing unit of the South Korean firm Samsung. Electronics in Noida will lead to the the strengthening of the business relations between the two countries and will also provide better services to Indians. Prime Minister Narendra Modi conducted an aerial survey over the affected areas of Cyclone Tauktae which was the strongest storm to impact Gujarat since 1998. During his survey he was seen wearing noise-canceling headphones from Bose which makes sounds more clearer and provides better experience by cancelling unnecessary noises.

One of the most luxury watches developed by Swiss brand is admired by Narendra Modi. The watch is known for its aesthetic features and their high precision level and costs around ₹1.3 lakh.

Narendra Modi is not much fond of automobile but he has always had an entourage of heavy vehicles at his disposal whenever he has gone out. One common feature is that all vehicles owned by him are very strong and hard which will ensure safety and security at its highest level. The vehicle which was used to drive Modi to the Rashtrapati Bhavan for his swearing in ceremony to become Prime Minister and became one of the first cars to escort Narendra Modi. Mahendra Scorpio, launched in 2017 is known for its durable and well-built structure. 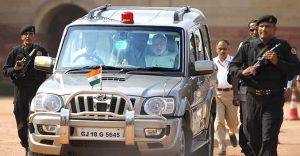 Modi ji owns a variety of vehicles of which one is an impressively capable off-roader that offers astonishing performance on paved roads, Range Rover HSE 2010. The vehicle provides 5-litre V8 engine capable of pumping out 375 bhp or power and 375 Nm of peak torque. It is a full armoured behemoth and is great when it comes to ensure security. The luxury car which is considered to be one of the safest cars of the world protecting the occupants from bullets or minor bombs. It has become the official car for PM Narendra Modi these days and comes with all the bells and whistles to make it an impregnable four-wheeler. The vehicles is greatly used by various politicians and industrialists when they can use a high-end ride. 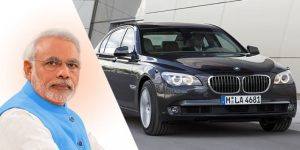 Prime Minister is a firm believer in the power of technology and himself is a great user of technology. He believes that technology makes work easier, effective and economical. Technology serves in a brilliant way to make human lives easier and more convenient. On the other hand, Prime Minister Narendra Modi is a fast learner and easily adapt to new gadgets which makes him cooler and more popular among his fans.

Elon Musk’s SpaceX has completed engine testing on its Starship S20 spaceship, which will soon embark on its first orbital test