Cyber War Against Russia: Anonymous hacked the Website of the Federal Bailiffs Service of Russia A popular Twitter account called “Anonymous”, a secretive activist group was waging a “cyberwar” against Russia more than three weeks ago. Since then, the account has claimed credit for deactivating significant Russian government, news, and corporate websites, as well as exposing data from organizations like Roskomnadzor, the Russian media censorship agency.

It appears to be true, according to Jeremiah Fowler, a co-founder of the cybersecurity firm Security Discovery, who collaborated with Website Planet researchers to validate the group’s claims. Summarizing the findings, he wrote in a report: “Anonymous has proven to be a very capable group that has penetrated some high-value targets, records, and databases in the Russian Federation.” Today, they hacked a website of the Federal Service of Court Bailiffs (FSSP) and displayed their data alongside their logo. FSSP The FSSP is the Russian Judiciary’s enforcement arm, responsible for the safety of court officers, the efficient operation of the judiciary, and fugitive operations, as well as providing security and preserving order within court buildings around the country. 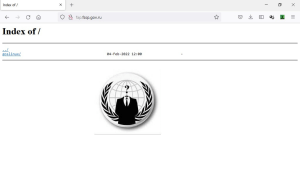 The FSSP was established in November 1997 under Boris Yeltsin’s presidency as the Department of Bailiffs, and Vladimir Putin upgraded it to a federal agency in 2004. Since February 2017, Sergey Sazanov has served as Acting Director of the FSSP and Chief Bailiff of the Russian Federation. Since declaring a “cyberwar” on President Vladimir Putin in revenge for the invasion of Ukraine, the Anonymous hacktivist group has been assaulting Russia with cyber-attacks. Several members of the group spoke to the BBC about their motivations, tactics, and plans.

An Anonymous cyberattack on Russian TV networks stands out among all the cyber-attacks carried out since the Ukraine conflict began. The hack was documented in a brief video clip that shows regular programming interrupted by footage of bombs exploding in Ukraine and soldiers discussing the hardships of the fight. Earlier, Anonymous had announced their initiative on Twitter, stating: “Put yourselves in the shoes of the Ukrainians being bombed right now. Together we can change the world, we can stand up against anything. It is time for the Russian people to stand together and say “NO” to Vladimir Putin’s war. We are Anonymous. We are Legion (sic) Expect us.”

The conflict in Ukraine may prove to be a game-changer for cyber terrorism. It may go down in history as the fight that established this style of engagement as a viable means of resistance around the world. It could, however, be the catalyst for a new outbreak of Europe’s most severe war since World War II’s end.