The richest man of India, the humorous fame of Twitter Elon Musk now came forward with his mocking tweet on whistleblowers as he promoted the latest product of Tesla i.e. a Cyberwhistle.

Elon musk has today tweeted, “Blow the whistle on Tesla!” with a link to feature the online purchase. 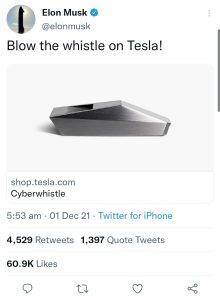 On the website, the $50 whistle is already out of stock maybe because of the vast fan base of the CEO of Tesla, Elon Musk. The whistle is described as, “Inspired by Cybertruck, the limited-edition Cyberwhistle is a premium collectible made from medical-grade stainless steel with a polished finish. The whistle includes an integrated attachment feature for added versatility.”

After a while of making the tweet, Musk retweeted to attracting the attention of his 65.1 million followers, “Don’t waste your money on that silly Apple Cloth, buy our whistle instead!” in reference to the IPhone $19 polishing cloth to maintain the hygiene and quality of Apple display, including nano-texture glass, safely and effectively. He is mocking the cloth indicating it’s uselessness and urging the audience to instead buy his Cyberwhistle which is also of not much use to the people.

The billionaire is promoting the Cyberwhistle which is shaped like the Cybertruck, the electric pickup truck whose production was supposed to start this year but company procrastinated it to next year as announced by Musk.

The meme-loving Elon Musk is seen engaging in making jokes and spar with rivals many times. He is again using his humor to promote his new Tesla branded merchandise.