A Chinese was Found Living in Noida without Visa, Involved in illegal Activities As per the recent tweet, it claims that a Chinese was found living in Noida without a visa for the last 2 years. The person might be involved in many illegal activities. The user has put up an alert for the Noida Police to look into it. Other tweets also support this and declare to the investigation force to act on it as soon as possible.

The name mentioned in the Twitter post is Peng YongLiang with an Application ID 031221WALKKC. The document is issued by Foreigners Regional Registration Office (FRRO), Chennai.

Chinese will live in noida without visa from last 2 year and involved in many illegal activities please verify his visa @PMOIndia @myogiadityanath @ArvindKejriwal #ChineesCriminalsinNoida pic.twitter.com/BvW6zcYCJa

As per the sources, in 2019, the Greater Noida Police Department launched a drive to examine foreigners’ travel documents. During the four-hour operation, at least 320 people’s paperwork and permissions were inspected, with 60 of them found to be living on bogus or expired visas. They were all arrested at Surajpur police lines. 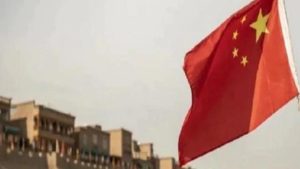 Chinese people will no longer be allowed tourist visas in India, according to the International Air Transport Association (IATA). They have announced that the tourist visas with 10 years are no longer valid. IATA is a global airline industry group with over 290 members, accounting for over 80% of global air traffic. Moreover, according to sources, India has suspended tourist visas as a result of Beijing’s failure to listen to India’s complaints about roughly 22,000 Indian students enrolled in Chinese colleges who are unable to return home for physical education. Until now, their passage into the adjacent country has been denied.