With ultra-wide monitor support, ray traced reflections, NVIDIA DLSS upscaling, and much more. Yes, that is what Spider-Man Remastered offers as it swings into PCs today.

Nixxes and Insomniac Games teamed up to bring this original Marvel story and PlayStation hit to PC, in which the players can now pick up on Steam and in the Epic Games Store.

“For five years I have used a 21:9 ultra-wide monitor. To me support for ultra-wide resolutions in games is really important. We want to give gamers who invest a lot in their setups the opportunity to play the game in the best way possible. It really makes a big difference when you see the game on ultra-wide or triple monitor setups. It is super cool to experience the game in this way!” said Graphics Programmer Hilze Vonck, who worked on the technical implementations of the Spider-Man Remastered.

“We initially planned support for 21:9, and after some internal tests we decided to go even wider and add support for 32:9 screens and 48:9 for triple monitor setups. The game lends itself very well for that. Swinging through the streets of Marvel’s New York on an ultra-wide screen gives a whole different and more immersive feeling.” said Lead Software Engineer Coen Frauenfelder.

Here are some visuals of the game: 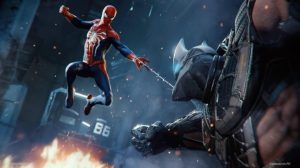