Elon Musk tweeted, “That is not the production wiper” but instead the Cybertruck will use Laser Beam Windshield Wiper

The American automaker Tesla is going to introduce a revolution in vehicles with the arrival of its much-awaited Cybertruck. It was first revealed in 2019 when it was reported that Tesla is working on laser beams to automatically clean debris off cars.

The last part in the car which can be changed coming to your mind is, I guess the windshield wipers but for the Out-of-the-world thinker Elon Musk, it can be common. But the futuristic idea of laser beam, is it even realistic?

Yes, for Tesla it is. Tesla also applied for a patent application for the laser beam windshield wipers in September. The application was titled, ” Pulsed laser cleaning of debris accumulated on glass articles in vehicles and photovoltaic assemblies.”

A picture of the Cybertruck from its testing has gone viral making the fans excited about it. But the account Tesla Owners Online tweeted today with a photo of the Cybertruck, “I don’t have a problem with the CT single large wiper, it’s pretty much what I expected. Being vertical when not used is also in the slipstream so that helps. Could it be better? Yes but Tesla engineers sweat the details so we don’t have to, they know what they’re doing @elonmusk” The account holder praised the large assumed windshield wiper and said that the engineers at Tesla know what they are doing. But maybe the account holder does not know about the Musk’s future plan for the Cybertruck.

The windshield wiper in the picture is just a kind of prototype and it will not be present in the main model. Elon Musk even confirmed and corrected it by tweeting, “That is not the production wiper” 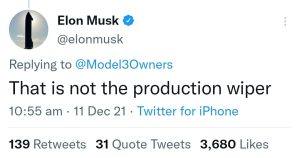 Elon Musk does not want anyone to doubt his technology. The Cybertruck is going to be an outstanding electric car with the most unbelievable technologies.