Death threat to Gautam Gambhir, Security outside his house beefed up

The Bhartiya Janata Party member and former cricketer Gautam Gambhir has approached the police with a First Information Report (FIR) about him receiving a death threat via mail from ISIS Kashmir.

The former Indian batsman has received a threat mail which read, “We’re going to kill you and your family” from a dangerous group called ISIS Kashmir. The player without delay filed a complaint to secure his and his family’s safety.

The complaint has been filed in the form of a letter written by Gaurav Arora on behalf of Gautam Gambhir and sent to the DCP Central district which read, “This is further to our telecommunication, we have received an email from ISIS Kashmir on the official email ID of Gautam Gambhir on Tuesday evening. The mail states death threat to MP and his family. I therefore request you to look into the matter and make adequate security arrangement.” 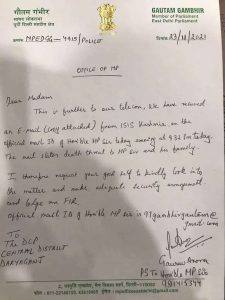 The DCP of Central District, Shweta Chauhan has stated that the securities outside the residence of Gautam Gambhir in Rajendar Nagar, East Delhi has been increased and also serious investigations are going on in the matter after the filing of complaint.

The left-handed opening batsman Gautam Gambhir has played a good game for India in the International cricket for about 15 years and took retirement in 2018. After that, later in 2019, he joined the Bhartiya Janata Party and was soon elected as a Lok Sabha MP from East Delhi because of his popularity due to his achievements in cricket.