Simranjit Mann of the SAD(A) wins by 5,800 votes in the Punjab Sangrur Lok Sabha election 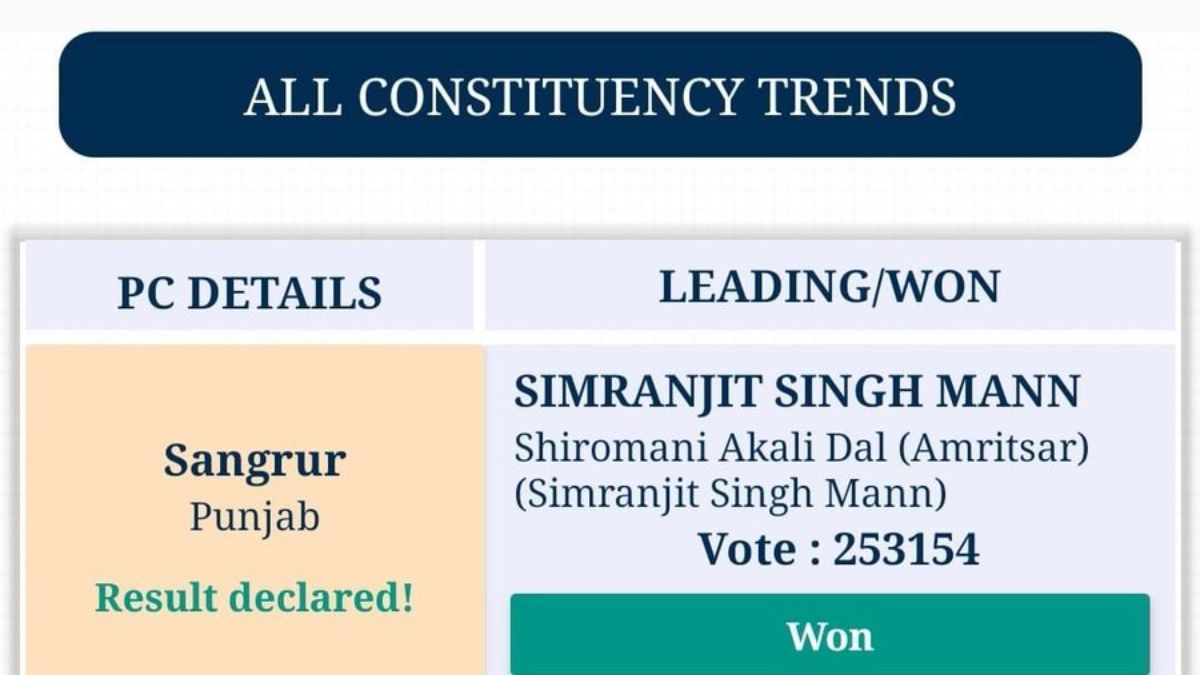 Gurmail Singh, an opponent of the AAP, thanked the voters for their support on Twitter after the election:

I am grateful to our voters of Sangrur for having elected me as your representative in parliament. I will work hard to ameliorate the sufferings of our farmers, farm-labour, traders and everyone in my constituency.

While everything was going on, AAP declared defeat in the bypoll and stated that it honored wishes of the majority voters. This time, 15.69 lakh people were eligible to vote.

Mann, 77, is a former member of parliament and the leader of SAD (Amritsar). He stood against Gurmail Singh of the AAP, Kewal Dhillon of the BJP, and Dalvir Singh Goldy of the Congress. In a setting of strict security, the vote-counting process started on Sunday at 8 AM.

On June 23, voting decided the status of 16 candidates who are standing for election. A low turnout of 45.30% was recorded in the bypoll for the Sangrur Lok Sabha seat, compared to voting rates of 72.44 percent in the 2019 Lok Sabha elections and 76.71 percent in the 2014 elections.

Bhagwant Mann’s withdrawal from his Lok Sabha seat following his election as an MLA in the assembly election previously this year forced the need for the election. In both the 2014 and 2019 parliamentary elections, Bhagwant Mann, who is currently the state’s chief minister, won the Sangrur seat.

After the Aam Aadmi Party’s massive win in the state Assembly elections in March of this year, the bypoll is the first significant electoral contest. While the opposition parties, Congress, BJP, and SAD, are hoping to claim victory after being thoroughly defeated in the Assembly elections, the ruling AAP views the byelection as a prestige war to keep its stronghold.

The Aam Aadmi Party (AAP), that won all 9 seats in the 2022 Assembly elections (Lehra, Dirba, Barnala, Sunam, Bhadaur, Mehal Kalan, Malerkotla, Dhuri, and Sangrur), is seen as having its stronghold in the Sangrur parliamentary constituency.

Indo-American founder of Devas, files petition against Nirmala Sitharam and other…

Politician in Canada muggles up a bee