The upcoming musical, West Side Story is the adaptation of the famed 1957 Broadway musical of the same title. Director by the three-time Oscar-winning filmmaker Steven Spielberg is all set to bring the unforgettable love story to the big screen. In a new viral video shot behind-the-scenes, he is seen mentioning what it means to him to shoot the famed musical and how he made a promise to himself about the movie.

The video shows the Jurassic World director raising a toast to the movie on the first and last day of shoot. He also talked about being “proud and honoured” to have gotten a chance to direct the epic musical. Morever the video also features a small teaser of the film with Rachel Zegler and Ansel Elgort, the lead characters sharing screen. 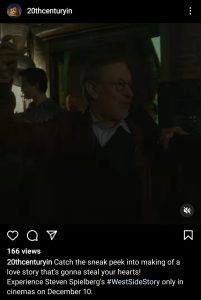 It was dream coming true experience for the director and he said, “I was ten years old when I first listened to the West Side Story album, and it never went away. I’ve been able to fulfill that dream and keep that promise that I made to myself. ‘You must make West Side Story.'”

Talking about the movie, he once stated, “‘West Side Story’ was actually the first piece of popular music our family ever allowed into the home. I absconded with it — this was the cast album from the 1957 Broadway musical — and just fell completely in love with it as a kid.”

The classic musical is the story of two lovers — Maria, a Puerto Rican, whose brother Bernardo is the leader of the “Sharks” street gang and Tony, a former leader of “The Jets”, who fought with The Sharks set in the New York City. The movie will be released on December 10 in theaters.