Former Miss World Priyanka Chopra has put a full stop to the rumours about her divorce from the American Singer Nick Jonas with her comment on his new Instagram post. Priyanka Chopra Jonas recently removed the surname ‘Chopra Jonas’ from her social media handles which left the fans puzzled.

The act led to the spreading of rumours about the cute couple getting divorced which broke the heart of their millions of fans. People thought that something is not well between the couple and thus they are going to split up but neither Priyanka nor Nick made any official statements regarding this. 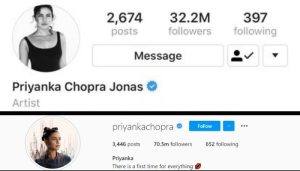 But Priyanka Chopra’s mother Madhu Chopra responded to the rumours and said, “This is all rubbish, don’t spread rumors.”

And now, Priyanka Chopra also subtly shut all the rumours down with her heartwarming comment. Recently, Nick Jonas has shared a video of his workout on Instagram captioned, “Monday motivation. Let’s get it.” Priyanka Chopra hyped her husband and made the flattering comment comment, “Damn! I just died in your arms…” with the emojis further representing her love and admiration towards Nick Jonas. On December 1of this year, the perfect together couple will complete three years of their marriage. The two tied the knot with each other in a Christian and a Hindu ceremony in Jodhpur’s Umaid Bhawan Palace in 2018 on December 1 and 2 in 2018. Priyanka Chopra and Nick Jonas spent their Diwali together with overwhelming happiness and also posted pictures of the housewarming ceremony of their new residence captioned, “With the blessings of Goddess Mahalakshmi we invite Her grace and abundance into our home. Happy Diwali.”