Money Heist Season 5 Volume 2 is OUT! Check it out! The wait is finally over now. The finale season of the popular crime drama series Money Heist is out now. So let’s just put on our comfy wears and sit in the warm blanket with Netflix on our devices and popcorn, cold drinks in our hands and just enjoy the finale of the most-awaited series full of suspense and thriller.

The release of the Season 5 Volume 2 of the series at 1:30 p.m. on 3rd of December is going to end the curiosity of the fans and fill them in sorrow of not being able to watch more of the show. When the show began filming, they did not have a big budget and just managed with the little resources. It was also shot the first season of it in Madrid alone. But things worked out for the crime series when Netflix picked it up and made it one of the most popular series all over the globe.

About an hour ago, Netflix also tweeted to announce the release,

“Get your suits on.

The official account of La Casa De Papel or Money Heist also made a thread of tweets with a small introduction to the main character of the end of the “greatest heist of the world”.

For the Professor, the mastermind who had never imagined that his gang would be the biggest treasure he’d find in a heist. #MoneyHeist” 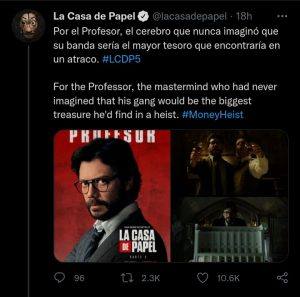