“It was an honour to represent my country”, Vir Das wrote sharing picture of the medal from International Emmys Awards 2021

The International Emmys Awards 2021 were organized last night. Actor-comedian Vir Das was nominated for his Netflix comedy special ,Vir Das: For India but lost the Best Comedy award to France’s Call My Agent Season 4 at the 49th edition of the International Emmy Awards. But he is still honoured to represent the country in the international platform.

Vir Das has shared his nomination medal on social media and also a picture of a salad from the Awards Venue in New York city and wrote, “I was nominated for best comedy at the International Emmy Awards, for jokes. Call My Agent, a gigantic beautiful show I love won. But I got this medal, and ate this fantastic salad with a very interesting crispy cheese topping. It was an honour to represent my country. For India. It’s always for India.” 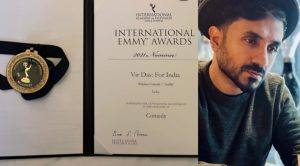 Vir Das has recently got himself in a controversy after he posted a clip from his show titled “I come from two Indias” on YouTube. The main controversy was about his statement ‘Indian men worship women during the day and gang-rape them at night’ in the video.

He faced a lot of criticisms because of the video. Then on November 16, he issued a statement, an excerpt from his statement read: “It ends in a gigantic patriotic round of applause for a country we all love, believe in, and are proud of. That there is more to our country than the headlines, a deep beauty. That’s the point of the video and the reason for the applause.”

There were various other nominations from India including Nawazuddin Siddiqui for the ‘Best Actor’ category for his performance in ‘Serious Men’, Sushmita Sen’s ‘Aarya’ for ‘Best Drama’ but unfortunately they all lost but still feel honoured to represent India. The comedian is also not disheartened but proud of his works.