On August 14th, 2022, Famous stock market investor Rakesh Jhunjhunwala died today as a result of a sudden heart attack, according to a Mumbai hospital.
Dr. Pratit Samdani of Breach Candy Hospital determined that Rakesh Jhunjhunwala’s death was due to a sudden heart attack. This was the medical facility’s first formal statement regarding Jhunjhunwala’s death. The investor was transported to the hospital by ambulance at around 6:45 this morning, where he was later declared dead. According to Dr. Samdani, Jhunjhunwala had diabetes and chronic kidney disease.

Rakesh Jhunjhunwala, an Indian business magnate who lived from 5 July 1960 to 14 August 2022, was a successful trader, investor, and investor. As a partner in his asset management company, Rare Enterprises, he oversaw his portfolio. He has an estimated net worth of $5.5 billion and was the 36th richest person in India (as of July 2022). He was frequently referred to as “India’s Warren Buffett” or the “Big Bull of India” because of his accurate stock market predictions and bullish outlooks.

Jhunjhunwala was raised in Bombay by a Rajasthani family; his father worked as an income tax commissioner there. His surname name reveals that he descended from Jhunjhunu, a Rajasthani village. He submitted an application to the Institute of Chartered Accountants of India following the completion of his education at Sydenham College. After hearing his father and his friends discuss stock markets, Jhunjhunwala developed an interest in them. While giving him advice on the market, his father never gave him any money to invest and forbade him from asking friends for loans. Rakesh started investing while still a student in college because he had the funds saved up. He invested $5,000 in 1985; today, his investment is worth $11,000 crores. 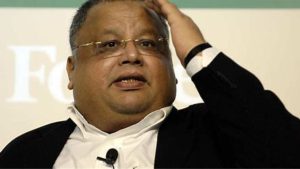 Why was Rakesh Jhunjhunwala called Warren Buffet or Big Bull of India?

Warren Buffett, one of the most successful investors and businessmen in the United States and the current CEO of Berkshire Hathaway, is frequently referred to as the “Oracle of Omaha.” Like his Indian counterpart, Rakesh Jhunjhunwala became known as the “Oracle of Dalal Street”. The ability to correctly forecast market developments and make investments in them was a characteristic shared by the two mavericks. As soon as these early investors bought shares, their value rose. However, the Indian bull was one of the first investors to benefit from the liberal reforms in 1991.

Rakesh Jhunjhunwala was a well-known stock market expert in India who maintained his optimism throughout. The big bull made it quite apparent that it agreed with the story of India’s economic progress. The seasoned investor, however, swiftly accumulated a large fortune by shorting the market as opposed to going long.

-At the age of 25, Rakesh Jhunjhunwala invested in his first Tata Tea shares in 1985 for Rs. 43 per share. The cost has increased to Rs. 143 per share three months later. Warren Buffett made his first stock transaction at the age of 11, and he filed his first tax return at the age of 13.
-Rakesh Jhunjhunwala owned several companies, notably Titan Company Ltd. of the Tata group. Titan’s stock is the greatest asset under Rakesh Jhunjhunwala’s ownership in terms of value. Warren Buffett is in charge of running Berkshire Hathaway, which is a holding company for numerous companies, including the battery maker Duracell, the food chain Dairy Queen, and the insurance company Geico.

Rakesh Jhunjhunwala always said, “Give your investments time to mature. Be Patient for the World to discover your gems“

Jhunjhunwala’s last appearance was on 7th August, at the inaugural of Akasa Airline, he also owns a 40% of stake in the airline.  “Normally a child is born in 9 months, we (Akasa Air) took 12 months. It would not have been possible without the cooperation of the Ministry of Civil Aviation,” he had said in his short speech at the Mumbai airport. Nowhere in the world has an airline been conceived and born in 12 months, he had said. Jhunjhunwala boarded the inaugural flight after giving his speech. 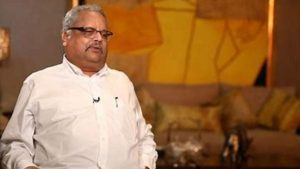 In a tweet by Prime Minister Narendra Modi, he said “Rakesh Jhunjhunwala was indomitable. Full of life, witty and insightful, he leaves behind an indelible contribution to the financial world. He was also very passionate about India’s progress. His passing away is saddening. My condolences to his family and admirers. Om Shanti,” “His vast experience and understanding of the stock market have inspired countless investors. He’ll always be remembered for his bullish outlook. My deepest condolences to his family,” Home Minister Shah tweeted.

Finance Minister Nirmala Sitharaman added “Shri Rakesh Jhunjhunwala is no more. Investor, bold risk taker, masterly understanding of the stock market, clear in communication- a leader in his own right. Fondly remember several conversations we had. Had strong belief in India’s strength and capabilities. Condolences,”

Everyone is deeply saddened by the demise of India’s Big Bull, Rakesh Jhunhunwala, and is praying and wishing for strength and courage for his family to handle this hurtful incident.